Balancing baseball duties with patient needs can be a difficult juggling routine. There are many, many factors to consider when accepting or declining trades in Major League Baseball. For the Cincinnati Reds, Dr. Timothy Kremchek is the last line of defense. Dr. Kremchek is a sports medicine and orthopaedic surgeon, founding member of Beacon Orthopaedics and Sports Medicine, and Medical Director for the Cincinnati Reds baseball team. 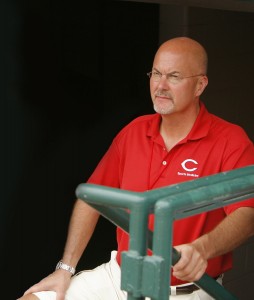 In the past, medical history and current condition were taken into account for players. With the advent of social media, however, trades are becoming public information much faster. This puts a higher stress on the speed of medical examinations and evaluations. In the words of Dr. Kremchek, it can be “very stressful.”

When Jay Bruce was set to go to the Blue Jays in early 2016, the trade fell apart citing medical concerns. This caused other teams to speculate on Bruce’s condition, and essentially put a red flag on him as an unhealthy player. Part of the blame falls on social media: word is now spread virtually instantly, so fans, management, and sportscasters jump to conclusions faster. Some are blaming reporters for breaking stories too early and publicizing trades before contracts are signed. Regardless of who is to blame, the problem isn’t going away soon.

While this presents an issue for teams trying to trade players, it also helps them save millions of dollars that might otherwise go to waste. In this case of public, instantly available information, you have to take the good with the bad. Years ago, teams had very little knowledge of their own players’ medical histories. These days, however, every time a pitcher pops an ibuprofen, it’s listed in his medical records. The thoroughness of record keeping today is almost frightening.

Not only are medical histories becoming increasingly complete, they are becoming increasing accessible. Instantly accessible. What used to take days now takes less than a half hour. Dr. Kremchek noted that with today’s technology, he can review a player’s medical status within ten minutes; without ever leaving his office. That’s a lot of pressure when a deal has been arranged and right before the dotted line is signed, it’s up to the Medical Director to give it the “thumbs up” or “thumbs down” after a ten minute look over complete medical history.

No medical director wants to be the fall guy if a trade doesn’t work out. Right now, though, the Reds have been diligent, which has resulted in them appearing “lucky.” If medical issues come up at the last minute, teams will often renegotiate the terms of the trade. This may involved substituting players, but sometimes does cause the whole agreement to fall through. With all of the money riding on MLB trades, erring on the side of caution is recommended.

To read the full story by Zach Buchanan as featured on Cincinnati.com, please click here.